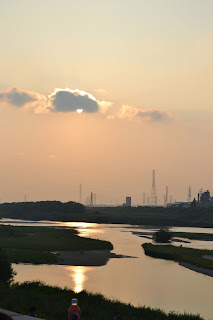 The last big events for the summer was the Peace forum.  It is a camp for kids with the focus of peace and understanding. Over the 3 days many teachers came and taught the kids various things. Since the aim of the program is to create understanding about the world they invite foreigners as guests and campers if possible. This year there were three kids from the Philippines. One of the boys was the son of Deacon Glen and he spoke Japanese fluently. The other two could only speak a little Japanese. Therefore my friend Takuji and I were interpreters throughout the week.

One of the teachers gave a math lesson that was symbolic of the way people are. Another teacher taught the kids how to make prisms. We were taught magic tricks and sang songs. One of the songs was Do Re Mi. It was the first time I ever sang it in Japanese. The teacher also taught us a song about farting. I am not kidding you. I got to sing a song in Japanese about farts. The best part was that I had to interpret it into English so one of the Filipino children could understand why we were laughing so hard. So there I am trying to keep a straight face while telling the child how the singer of the song was trying desperately to hold in his fart on a bus but couldn’t. It was a hilarious.

Besides the singing, my favorite talk was about a music box. Have you ever seen the metal wind-up music players that you put into music boxes? Well one of the teachers played the music player for the children. The sound was pretty but very quiet. He told the students “if he found a good object, the music might become louder.” He then proceeded to place the player on the concrete walls and the plastic table. Both made the music sound awful. Then he placed in on the wooden doors. This made the player play the most beautiful music. The moral that I took away from the lesson was that there are people/things in this world that bring out the worst in us. But when you find those good people/things, they have the ability to bring out the best. They have the ability to make us play the most beautiful music in the world. In this life we should search for these good things and when we find them stick to them.

The last day we ended the camp with a feast of food that the children made. Each dish was from a separate country. A Korean Dance group also performed a traditional dance for us. Right before we said our final goodbyes Fr. Nomura gave a talk on why they host the Peace forum every year. He started out by saying that there are many countries in this world, many people of different colors, and many languages. Because of these differences people create borders, to build up walls to keep their possessions and cultures, which then lead to misunderstandings which then leads to wars. So how do we live among all the differences? The answer is peace. I know this seems like a nice but impossible idea. Fr. Nomura said that kids don’t understand borders or differences. Kids understand peace. Yes arguments happen but they are quickly resolved. As we grow up we are taught about differences. The hope of having these forums is to encourage the kids to look at the world with peaceful understanding. To look at the world as if there were no borders. Yes we are all different but deep down we are the same. We have the same needs and wants. We need to focus on our similarities rather than our differences. We need to find the good things in this life so that we can make beautiful music together. It is not easy but it must be done. 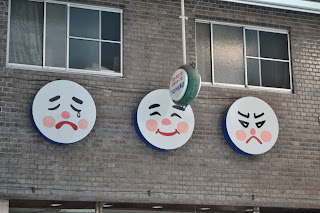 I wanted to let you all know that I will officially be returning stateside on October 9. I don't have exact plans for the future (if any one know of temporary jobs, I am all ears). However, I do know that catching up with family, friends, and my church families are in order, not to mention eating all the delicious Tex-Mex I have missed. For the next week and a half I will be enjoying as much of the time I have with the people I have come to know and love in Japan. Not looking forward to saying all the goodbyes that are a head of me but all good things have to come to an end, as they say. I just wish that wasn't so hard. I hope you all have a wonderful weekend!

Katie Young
For the past year I have been a missionary from the Episcopal Church's Young Adult Service corp. I worked in two youth centers in Nagoya, Japan. This year I am continuing to serve as a missionary in Japan but I will be working Sendai with the Let Us Walk Together Project of the Nippon Sei Ko Kai (Anglican Church of Japan). This project was started in an effort to help rebuild the lives of those who were effected by the tsunami and earthquake of March 2011. I will mostly be working with foreigners effected by the disaster.

Missionaries in the Field